Technource is a top Android app development company that offers cloud-ready and reliable apps as per your business needs. Our expert Android app developers stay updated with recent technologies and trends to use them in app creation.

We aim to provide techno-driven solutions for any type of requirements of clients. Android is the leading operating system for smartphones and the USA has more than 130 million Android Smartphone users. Android is the first choice because of its regular updates and wide range of features.

Technource is a popular name to get the best Android app development services for any industry. We offer our expertise to meet all business requirements of our clients on Android Applications.

EXPLANATION BY PROFESSIONALS OF TECHNOURCE

WHAT IS ANDROID APP
DEVELOPMENT?

Android OS was developed using Linux Kernel. Likewise, it is easily modifiable because it’s open-source and allows various GUIs development. The open-source code for Android application development is called AOSP (Android Open-Source Project). The Android apps developers can easily build apps by installing freely available SDK. Unlike iOS, Android apps can work on any device properly. The applications work on Java Virtual Machine. The latest version of Android is 12 and it’s the 19th one.

Android OS has the highest community and developers. Moreover, it has the highest success rate because of reduced costs and resources. Technource knows the Android application development system inside and out. Many businesses from the USA, Canada, Australia, and India reach us for custom application development. You can hire Android developers from Technource at any time and get robust, feature-rich, scalable solutions for your business.

When you hire Android app development company Technource, you will not have to worry about anything. From meticulous discussion on your topic to app deployment, we take care of everything while developing Android apps.

Check out the reasons that make Technource a leading development firm.

Digitization of a business requires many processes and you have to spend time and money. We at technource deal with all types of development issues within your budget. Contact us for the best Android app development services.

Different enterprises ask for different features and functions in their apps. It is because of variation in their business ideas. So, we consider all the requirements and offer personalized apps as per business objectives. If you don’t know how to develop Android apps, Technource is at your service.

If you have no idea how to develop an Android application, what should be the development platform, suitable technology, features, and functions, our experts let you know everything during the discussion. You can get free and genuine consultation at any time.

Professionals in our Mobile app development company analyze the impressive features in the popular apps. The designers make interactive UI and UX designs so that your app can have more visitors. Consequently, improve the conversion rate. We have developed many Android apps.

You can get the best business app solutions at Technource. Till now, we have developed Android apps for various enterprises and in many industries like Education, Communication, Healthcare, Real Estate, Travel, Food & beverage, hospitality, and Retail.

Android allows businesses to reach wider audiences with game apps. These types of apps generated around 67% of total app revenues in 2021. Our developers have expertise in making game apps of various types with impressive features.

Our developers make miniature application views (widgets) that you can embed in your apps. We develop from simple to innovative Widgets for Home screens. Android Widget development is important to include shortcuts.

We use many app testing tools to remove flaws from the app. Our dedicated testers spot the errors and bugs in the apps and inform the developers to fix them. Moreover, we follow the Agile development method to avoid any type of errors.

We can deploy your application on various operating systems as per your need. Our team ensures impeccable deployment on multiple platforms to avoid any issues in the future. Moreover, deployment on various platforms gives exposure to your app on a global scale as well.

Discuss Your Project with Our Specialists

Want to develop a beautiful and scalable app for people? Share your business idea with experienced developers and innovative designers.

BENEFITS OF CHOOSING ANDROID APP DEVELOPMENT FOR YOUR BUSINESS

The Android App development offers several benefits that are why most businesses choose it. Have a look at some crucial advantages below.

As Android is an open-source platform, it also offers a free software development kit(SDK). Android apps are easy to develop, deploy and test. By adding intricate details, with low investment, you can get a high ROI.

The android offers a versatile option for creating applications with diverse functionality. It enables developers to create complex technical solutions with easy customization. Moreover, it offers flexible integration of communication and multimedia tools with timely updates.

Android applications can deploy in various ways. Without relying on a single market you can distribute your app on the Google play store to third-party app marketplace and sales channels. So with great promotional strategies, your apps can reach users through multiple channels.

One of the important benefits of Android OS is developers can use Android SDK easily. Moreover, material designs are also easy to use from SDKs. Our Android app developing team knows in-depth about it.

Android app has a faster deployment cycle, thus sometimes it takes only a few hours for the same. Your app can have quick market exposure. Our developers give a competitive edge to your app so that it can compete and succeed.

You can get the Best Android app developers for error-free solutions that are within your budget. So, hire developers by following just 4 steps and put the best foot forward for an amazing app.

THE BEST DEVELOPMENT METHOD TO ENSURE THE SUCCESS OF THE APP

We follow the Agile development method to make an impeccable app on time. Development progress is checked at every stage to remove any flaws from it. You can get a quality app without waiting much and start your business soon.

SEVERAL BUSINESSES ACROSS THE GLOBE APPROACH US

The team of Technource has developed impressive applications for many enterprises. Our successful solutions for the people helped us to make happy customers. You can check out some of our projects.

Hatch is an On-Demand Package delivery application, which is similar to Uber. Only that, here you send packages delivered instead of people and you either sign up as drivers or sender for packages, unlike a taxi booking app. 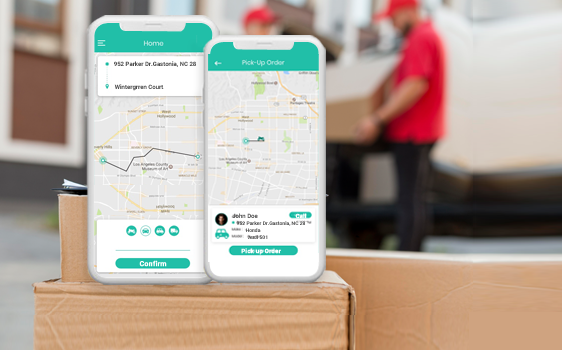 Read the Android App faq below and if you have any other questions, ask us at any time.

What are the requirements for mobile app development?

What should I check while hiring an Android app development company?

Technource follows the Agile Scrum Methodology for Android app development. In which, we focus on interactive and incremental processes. It leads us to maintain transparency in the development process, and we can provide a robust and bug-free app to our clients.

Which technologies will you use for my Android app development?

Here is the list of the technologies used for your Android app development.

Do you sign an NDA for my Android app development?

Yes, we sign a Non-disclosure agreement with you, in which we ensure you do not disclose your business idea and other confidential things to anyone.

Have any questions unanswered?

React Native vs Flutter vs Ionic: Comparison Guide
Why is Flutter App Development Trending & Demanding Among Startups?
Top Tools & Technologies will be used for Mobile App Development in 2022